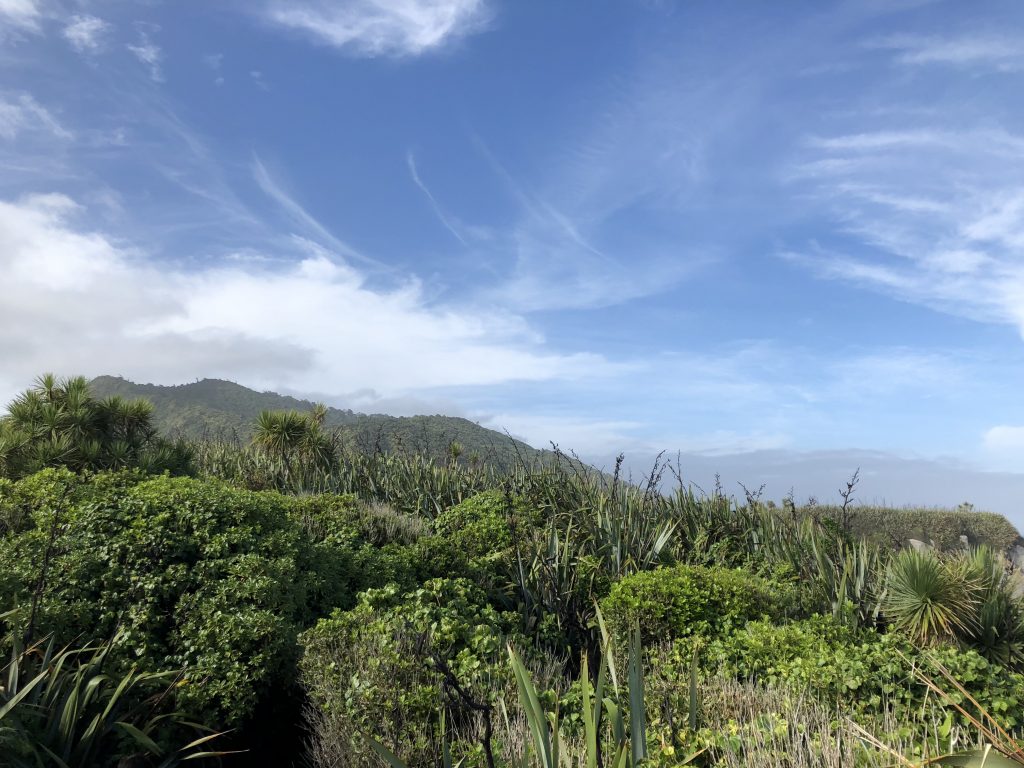 After our glacier hike we wanted a bit of relaxation for our legs, because we had aching muscles. So we had just two stations on our plan so far. We headed to Elisabeth point. A nice place north of Greymouth on the western coastline. We drove to the very last carpark and had to walk for 40 minutes. But this time is was squire easy way without having to climb over slippery rocks. 😉 We passed different types of vegetation. One, which looked like the rain forest and the other one like usual plants at the shore. But it was really quite relaxing. We just went a bit faster because it looked like it would start raining soon and we didn’t want to get wet like the day before.

As we walked through the little forest, a few Wekas crossed our way. It’s one of New Zealand’s iconic large flightless birds. Some of them were very attracted to us and came pretty near. But unlikely they are not as robust as they seem to be and have disappeared from big parts of the mainland. We had fun watching them. 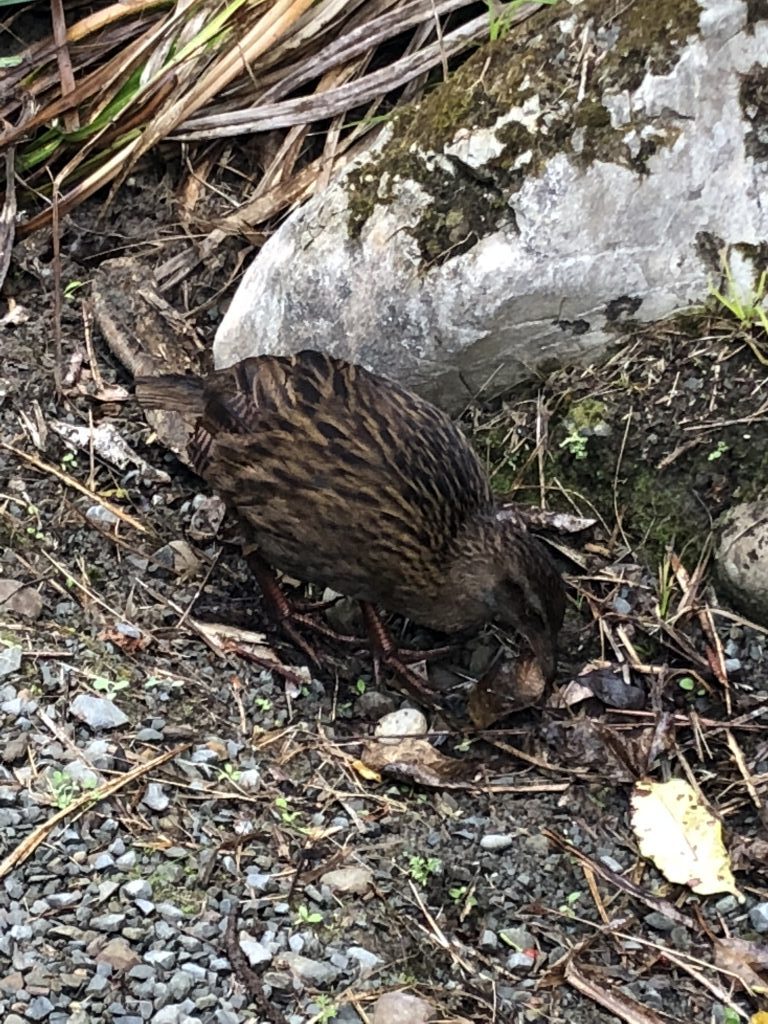 At the end of this little track we were surprised with a stunning view. But I have to say, that’s likely with most of the tracks in New Zealand.

On our way back to the main road we discovered an 24/7 fresh milk machine and made some capers because we hadn’t have any milk to drink so far on our journey. We could even see the cows running around on a wide field. It tastes different than the one we get back in Germany but still much better than the one from the supermarket! 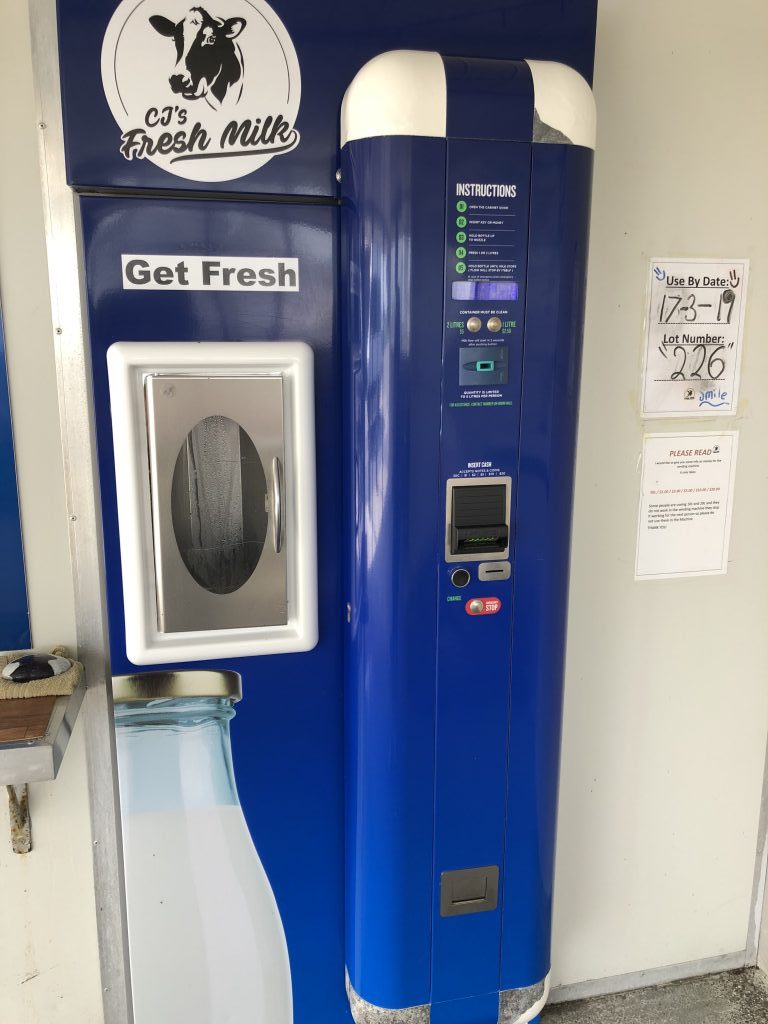 After our little success we drove further up the west coast to the Pancake Rocks and Blow Holes. The Pancake Rocks are stone formations which look as if they were layered over each other. And with the ocean around them, it looks pretty interesting. As we arrived at the carpark it was pretty stuffed but it was ok as we got to the little round trip. The people were spread all over the place, so it hadn’t been to crowded, because the return ist not the same way as the route towards the spectacle.

The Pancake Rocks itself is eroded limestone, which were created by an enormous on hard and soft layers of plant sediments and marinelife. They are in a constant change because the ocean bursts around the stones and grins it. So maybe in a years these will look totally different. 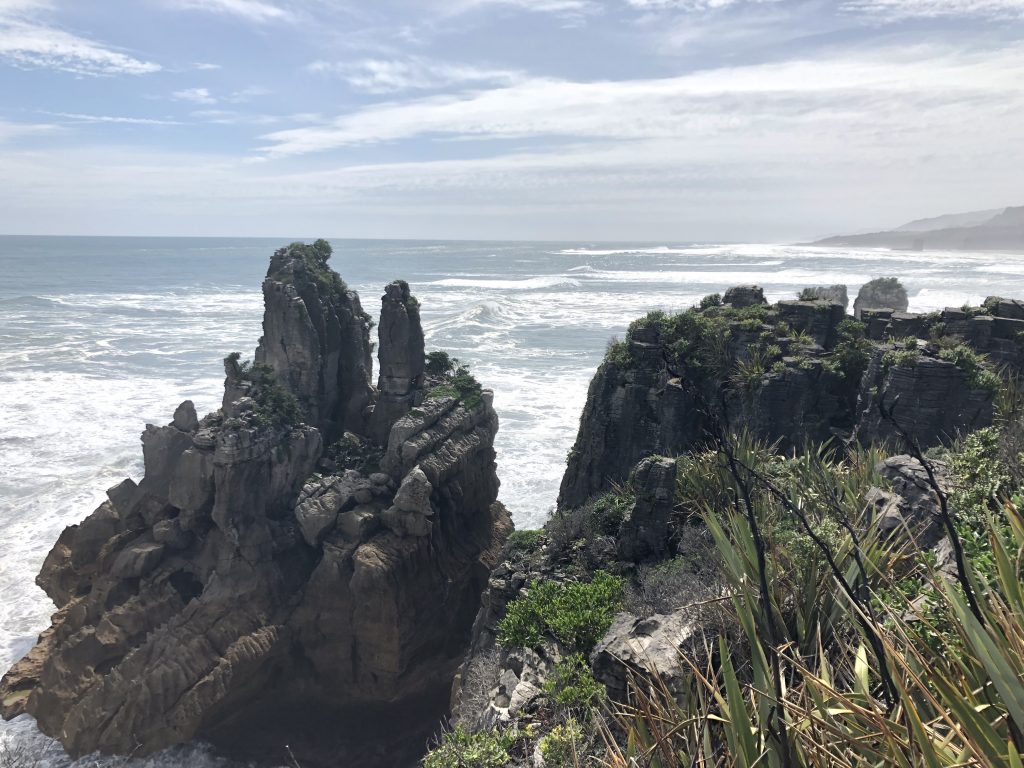 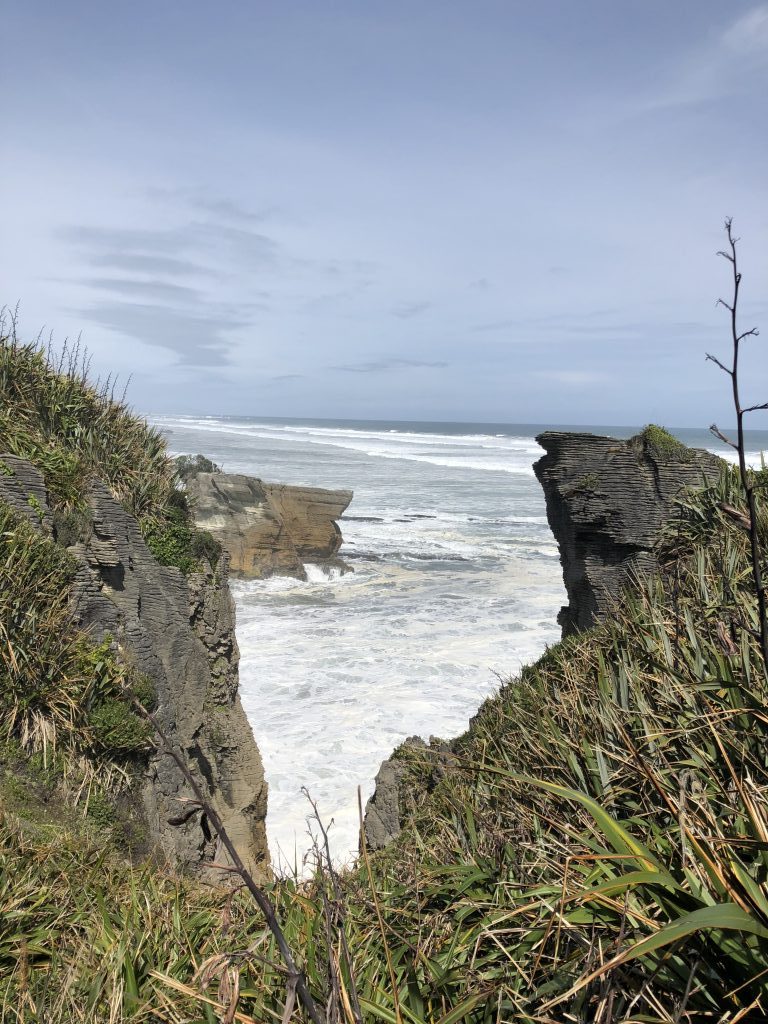 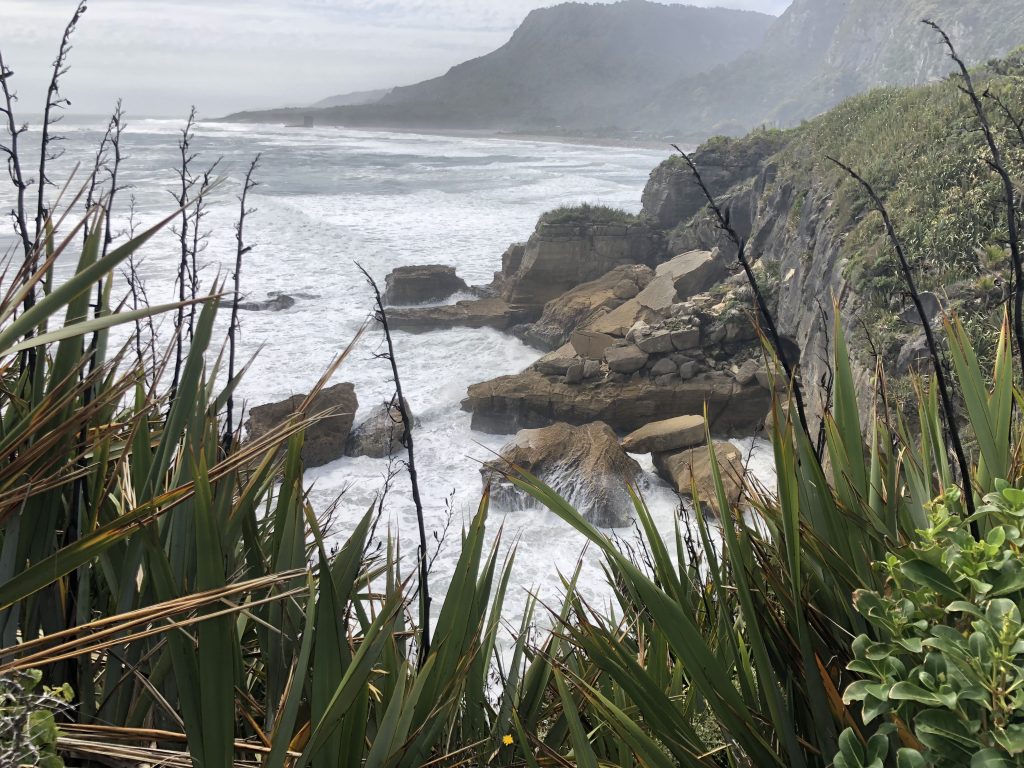 The Blow Holes are within the Pancake Rocks and it can be quite a spectacle when it’s high tide. As we got there it was low tide, so we experienced the slimmed version of them. But it’s still amazing to hear the noise and we could even see a little rai now, which followed after the blow. Normally the waves whips at the stone and if there is a hole in it, with way to the other side, the water bursts through it with a lot of power and gets blown out in the other side. It looks like an immense fountain. But we just got a little one. 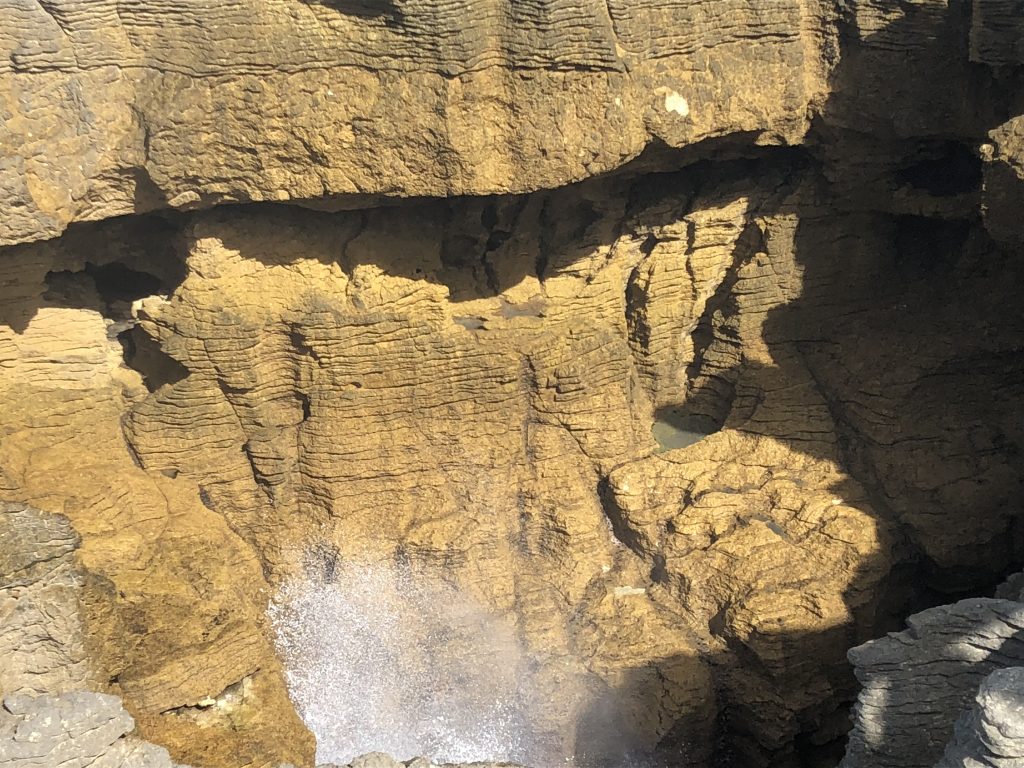 On our way further north it started to rain and we decided to stay at the Hope Saddle Lookout for the night. We couldn’t enjoy the view from there because we just saw clouds and we couldn’t grill outside. So we made some burgers in the camper and I could finally start to read my new book. I love thrillers.

Get to know more about our journey and where we saw the most beautiful beach in New Zealand so far.