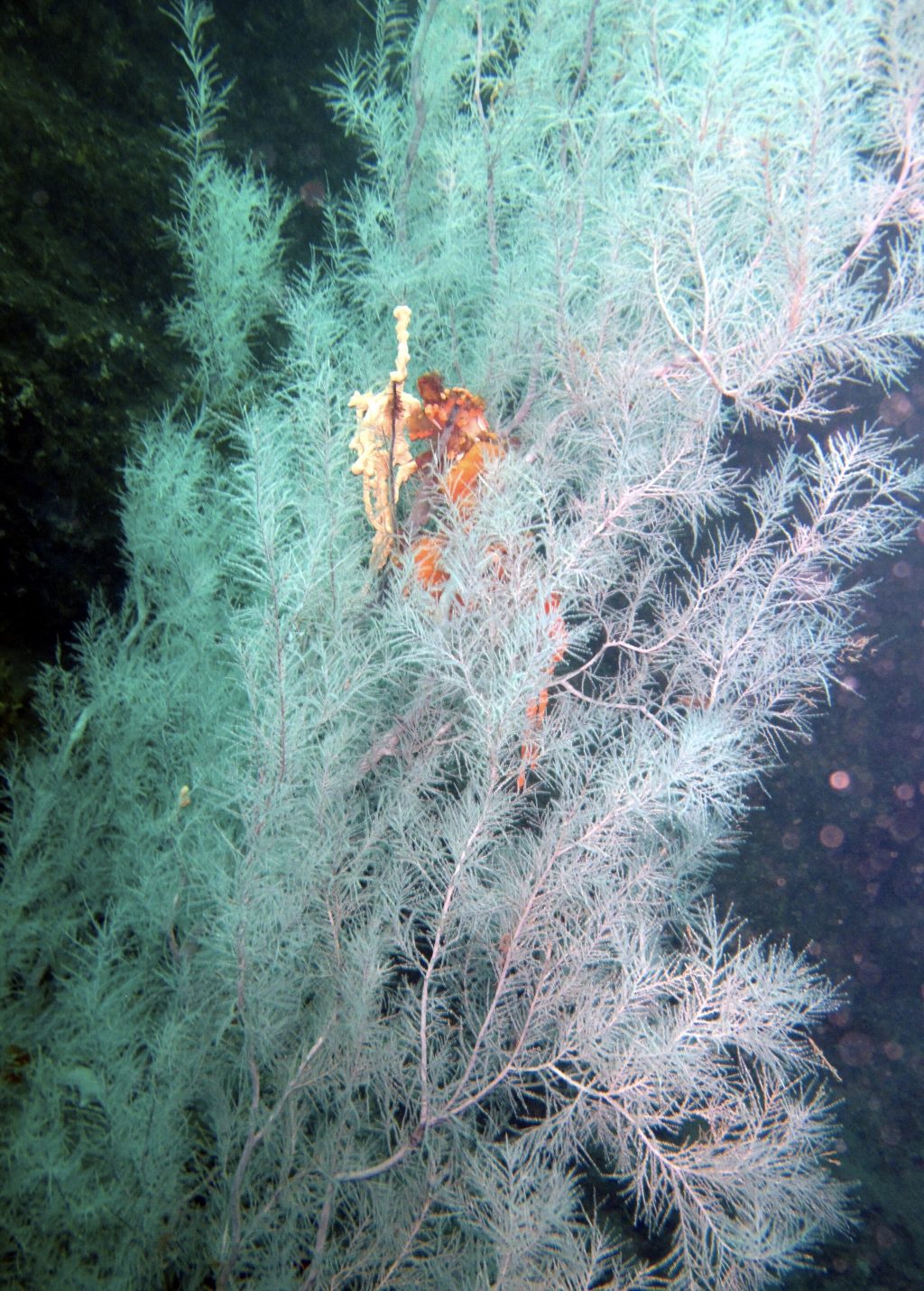 Our alarm rang at 5:30 to get there on time. It was still dark outside and we made our way down to the beginning of the sound after breakfast. The road was very curvy and luckily Basti was driving. From our campsite it took us around 1:15h to get there. So if you have to be there for a special arrangement just keep that in mind, that you need more time as your navigation system tells you. As we arrived we were looking for the dive center but couldn’t find any hint to tell us where it was. So we just asked and were standing in front of a car trailer, which was quite strange for us. At 8 a bunch of people showed up, we got some drysuits to try them on and after we found some that fitted, we could right jump on the boat. We had some beginners on the boat and some who did a drysuit course. So we as professional divers really thought about going in our own after we got the briefing. We told them not to worry about us, if we just disappear together. Finally it was time to jump in the water with a big step and to discover the black water. It’s called black water because you have a layer of fresh water on top of the salt water and this makes it very hard for the sunlight to get through. That’s why we also needed light.

Getting down there I was happy to wear a drysuit because the water temperature was about 14 degrees which would have been pretty cold in a wetsuit. We saw black corals. Which aren’t actually black, they are naturally white all over. But just called that name because they just appear in black water. And they just grow up to 1 cm per year. Some of them were about 3-4m tall and 300-400 years old. They look very fragile, so we had to be very careful diving around them. But that’s how you should always behave under the surface. The colors down there were pretty bright. From yellow to pink and red to green. They just appear when you use the light, which was fixed on the back of our hands. But we had to be careful because we could easily shine in someone else’s eyes. It felt great down there but the time always comes when you are running out of air and have to come to the surfaces again.

Between the dives we got some delicious vegetarian wraps, some cookies and a hot chocolate, coffee or tee. It depends on what we preferred. We choose the hot chocolate, of course 😉 to my surprise the wrap was wrapped in bee wax paper, which they maded on their own. It was very welcoming after seeing all these people buying stuff without looking if they are wrapped in plastic or not. After lunch got out of the boat and got to a little fresh water waterfalls. Quite nice to get rid of that saltwater in your face. To get back on the boat we had to take a little swim which is quite hard with a drysuit without fines but we managed it quite well.

We decided that we choose a typical Milford Sound dive spot for our second dive instead of driving out to the open sea. And guess what, it was the right choice because this way we got to see a big octopus and a little reef shark, about 1.5 to 2m. And I spotted it first and made the others aware of it 😊. We also saw a shark egg hanging on one of the coral trees. Unfortunately the lens of my camera got wet somehow and it didn’t close while making pictures – so we bought some rice on our way back 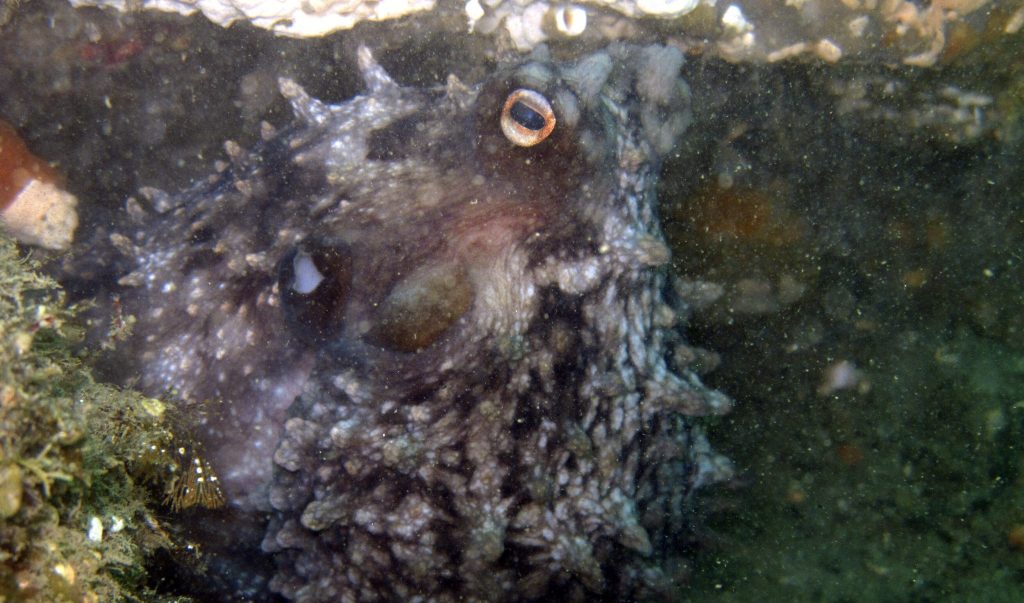 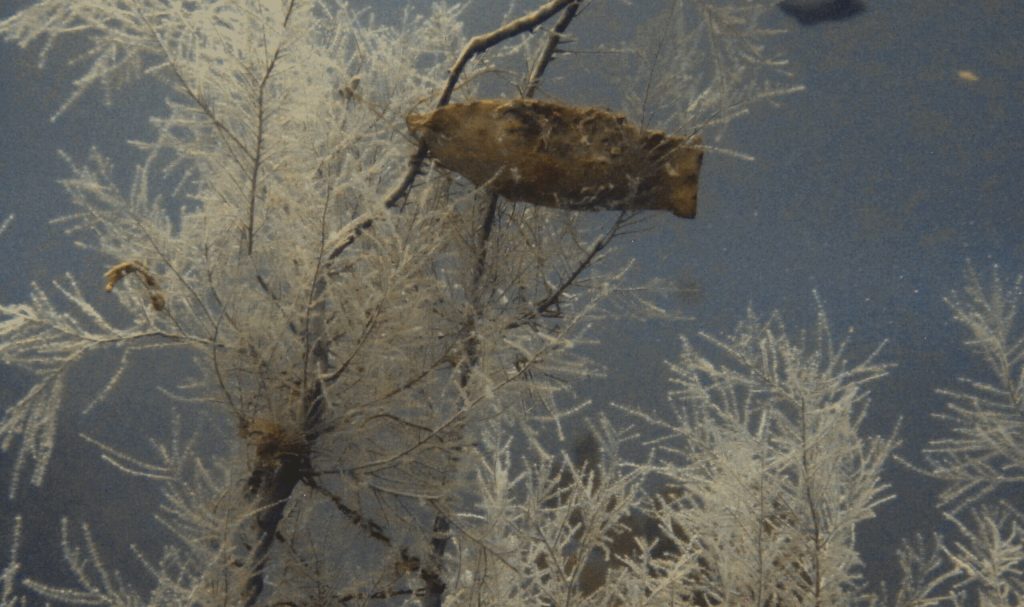 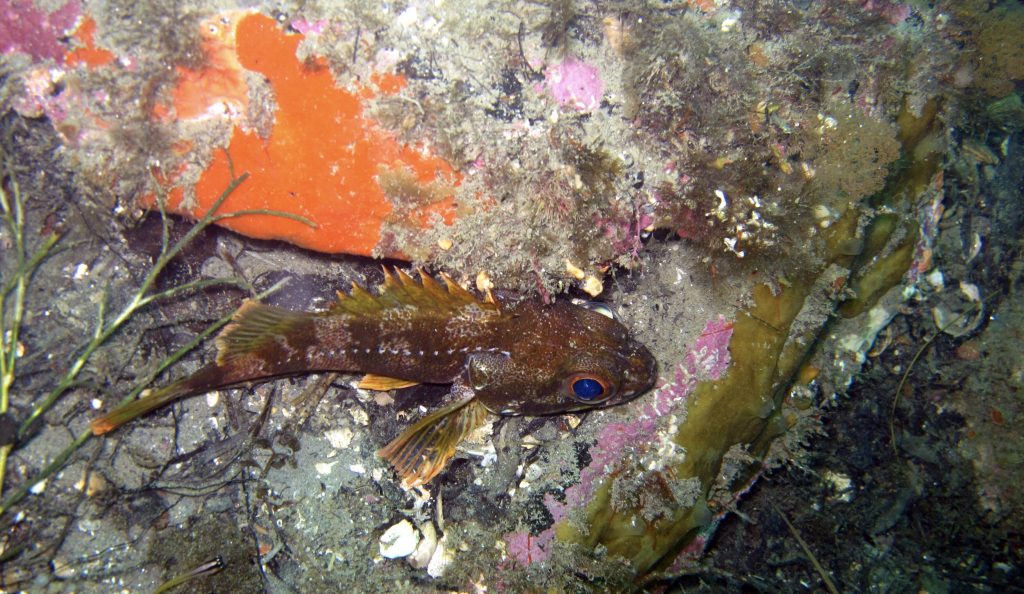 On our way back we just stopped at another waterfall and got some shower again. That was pretty cool. 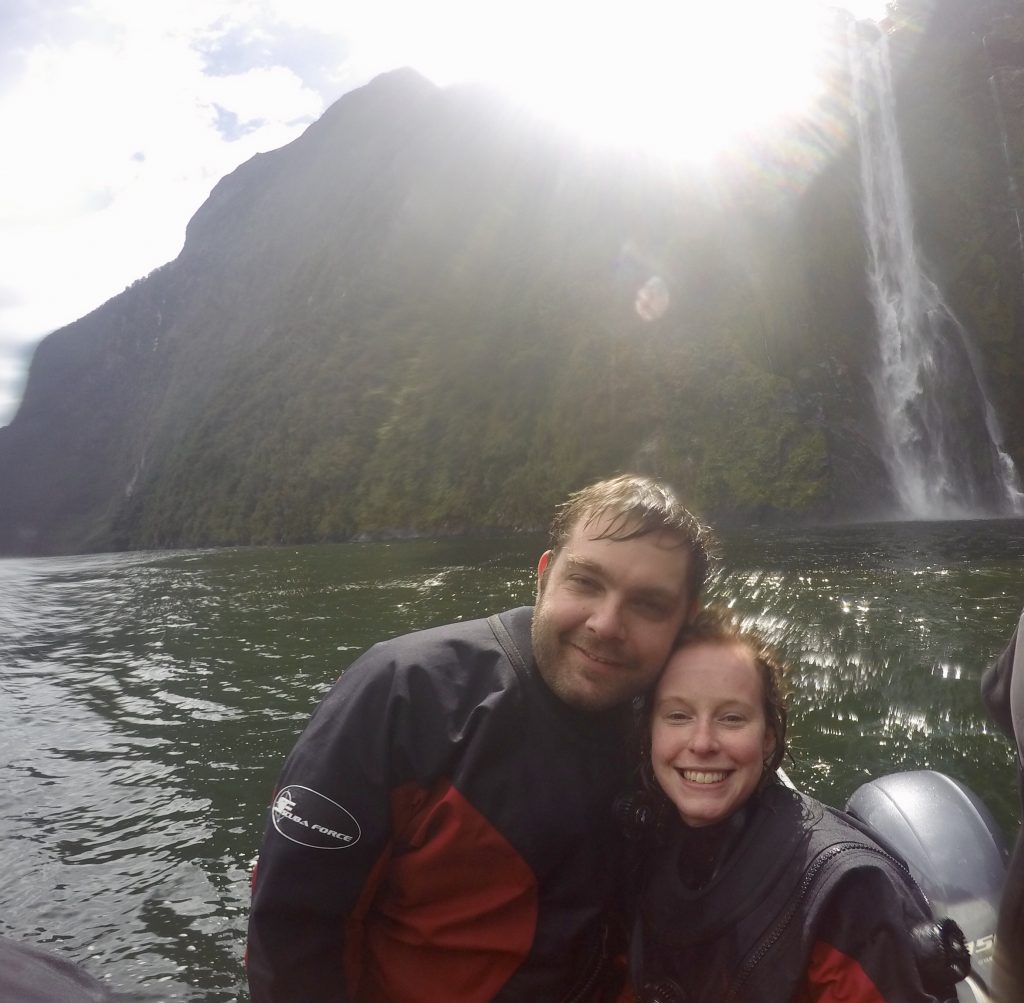 At the end we even made some advertising for our diving center back in Munich because some of the other divers also came from there. 😉

Did you know that Milford Sound is usually a fjord. They just gave it the wrong name. The difference between a fjord and a sound is, that a fjord is carved by glacier and a sound is normally formed by a river. And Milford Sound was formed by a glacier. The vegetation there is also very interesting. The trees just hold thereselves on the mountains with their roots. If they aren’t stable enough anymore, they fall down and take several other trees with them. That’s how these grey spaces built up. 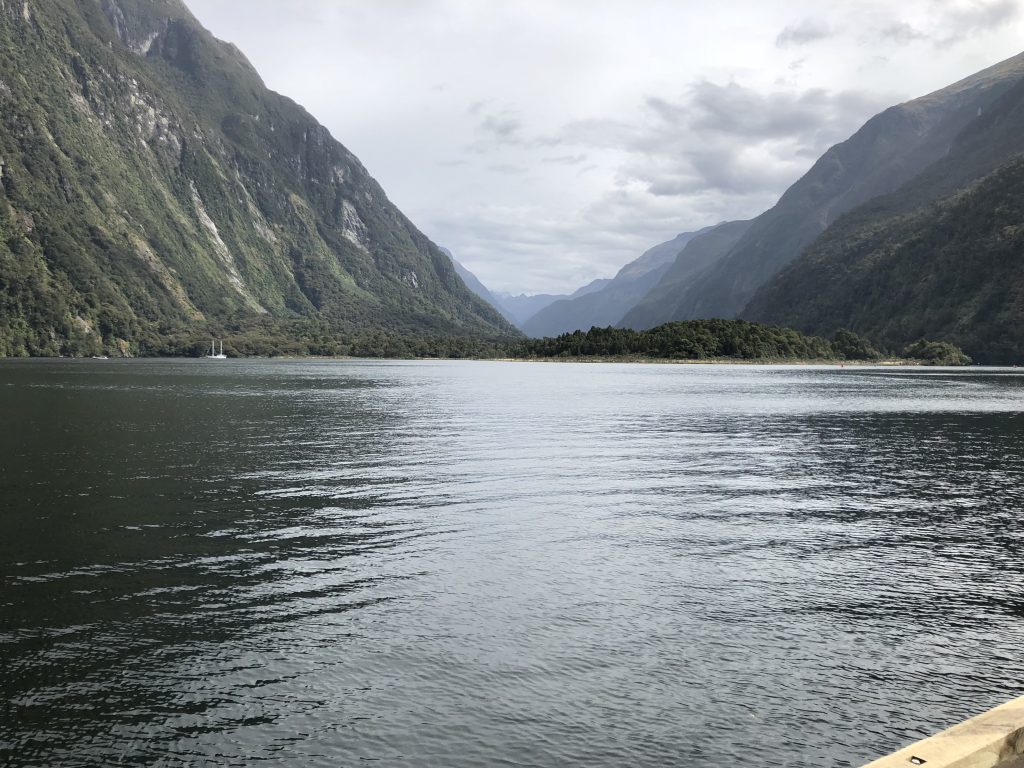 Unfortunately the lens of my camera got wet somehow and it didn’t close while making pictures – so we bought some rice on our way back and I hope it will work again. 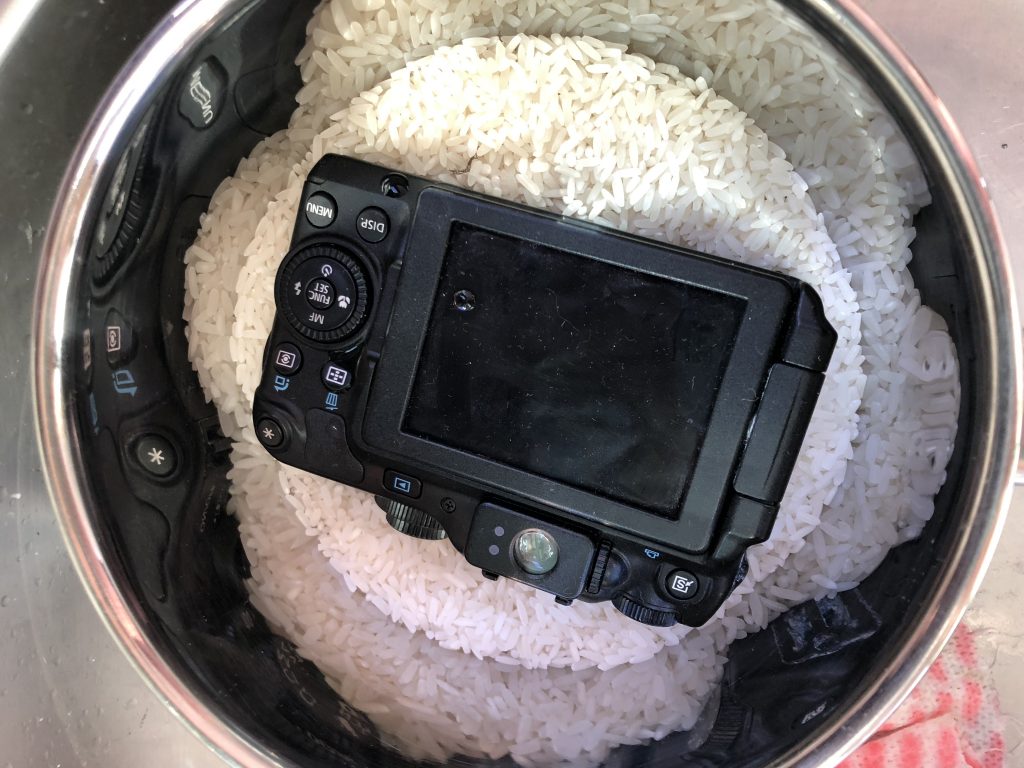 2 thoughts on “Diving in Milford Sound”